The high concept (in apps)

Most people don’t notice this but Twitter’s conceptual model is that of a recursive stack of cards. Each tweet is about as much as you’d fit on one side of an index card. Each tweet is also a thread which is a stack of related cards. The timeline is a top-level thread/stack. This is the reason why the algorithmic timeline is such a disruption of how even non-techies use Twitter: it’s a fundamental break in the service’s basic design.

The same area is used both for creating notes and searching. I.e., in the process of entering the title for a new note, related notes appear below, letting users file information there if they choose. Likewise, if a search reveals nothing, one need simply press return to create a note with the appropriate title.

If a note’s title starts with the search term(s), that title will be “auto-completed”. This selects the note and consequently displays it. Correspondingly, selecting a note places its title in the search area (De-selecting the note restores the search terms).

To create a new note, just type its title and press return. Edit the note as needed in the bottom pane.

To view or edit an existing note, type one or more words contained in its body or title. Reveal a note’s content by using the up/down arrow keys to select it.

My theory is that I can adapt this navigational model to work with the cards and stacks model popularized by Twitter.

Threads: I’ve decided to prefer threads over stacks as, even though, they would mean the same thing when you are building with cards as a core metaphor, they’ve come to have specialised meanings in UX and UI in general. Namely, a thread has come to be the standard term for “a linear sequence of things, some of which may also be similar linear sequences of their own”.

Cards: this has also become a generic term for a UI widget that contains some form of content.

Activity/Activity Stream: often called event stream. This is a stream of the events/activities that form all of the data belonging to a particular user. This is usually an implementation detail (every social media platform implements something like this, as do most apps/services that need to sync data from one place to another). But I would like to test surfacing it as a UI element to see if it helps recall and aids understanding. 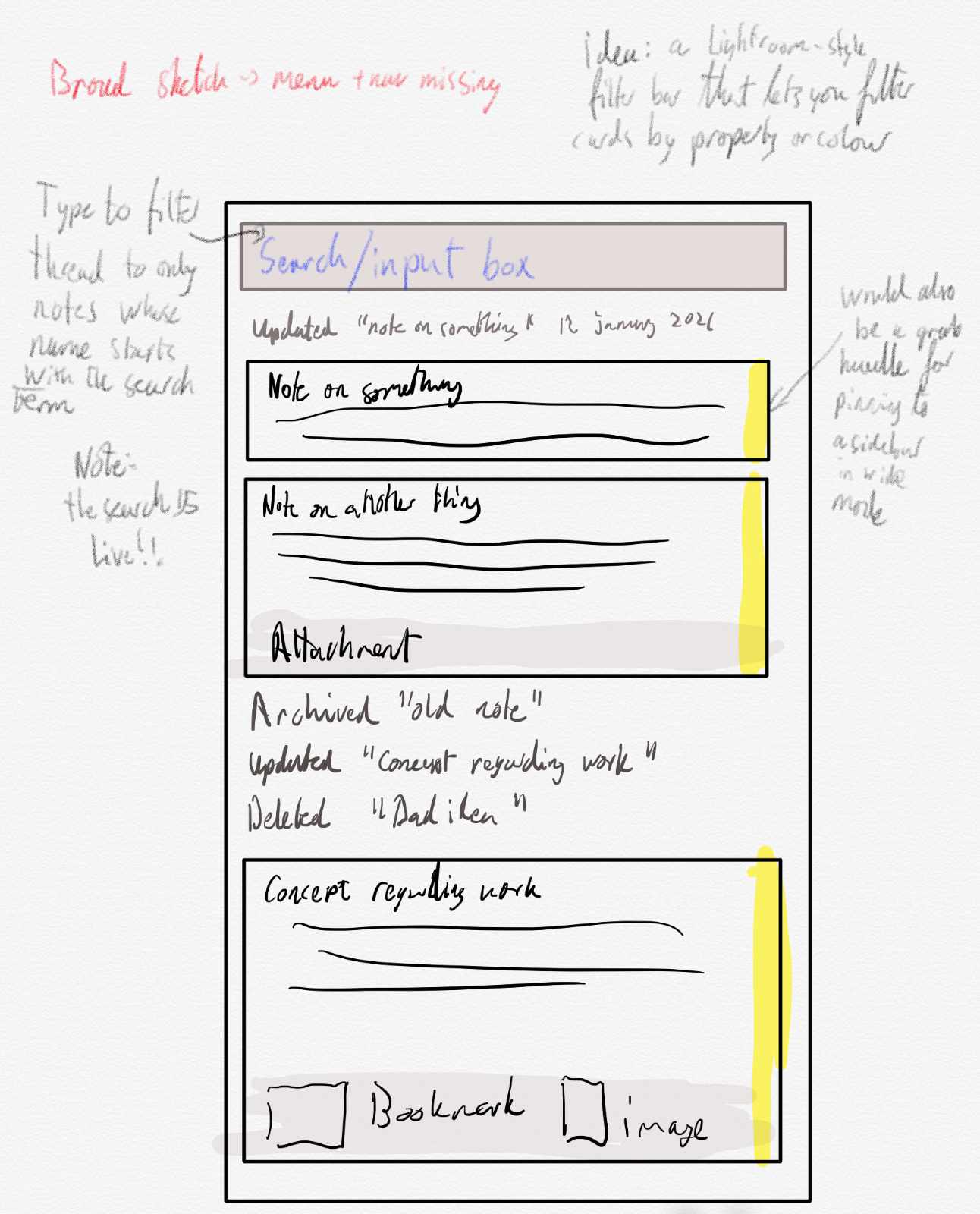 The core UI view of the app is a thread of cards (or cards and actions on cards, if I follow through with the activity streams idea).

The UI would be structured in a way that’s similar to Twitter or Mastodon:

One of the core properties of a search-first UI like this (true search first, not baked-on-because-we-don’t-do-design search first like Google Drive) is that it makes you much more aware of the names of things and constantly surfaces older, relevant, cards as you are thinking about names for your new thing.

The innovation here over Notational Velocity is that each card is also a thread and therefore a completely encapsulated search space. So, you can have a thread for ebooks. A thread for images. A thread for a project. For bookmarks. 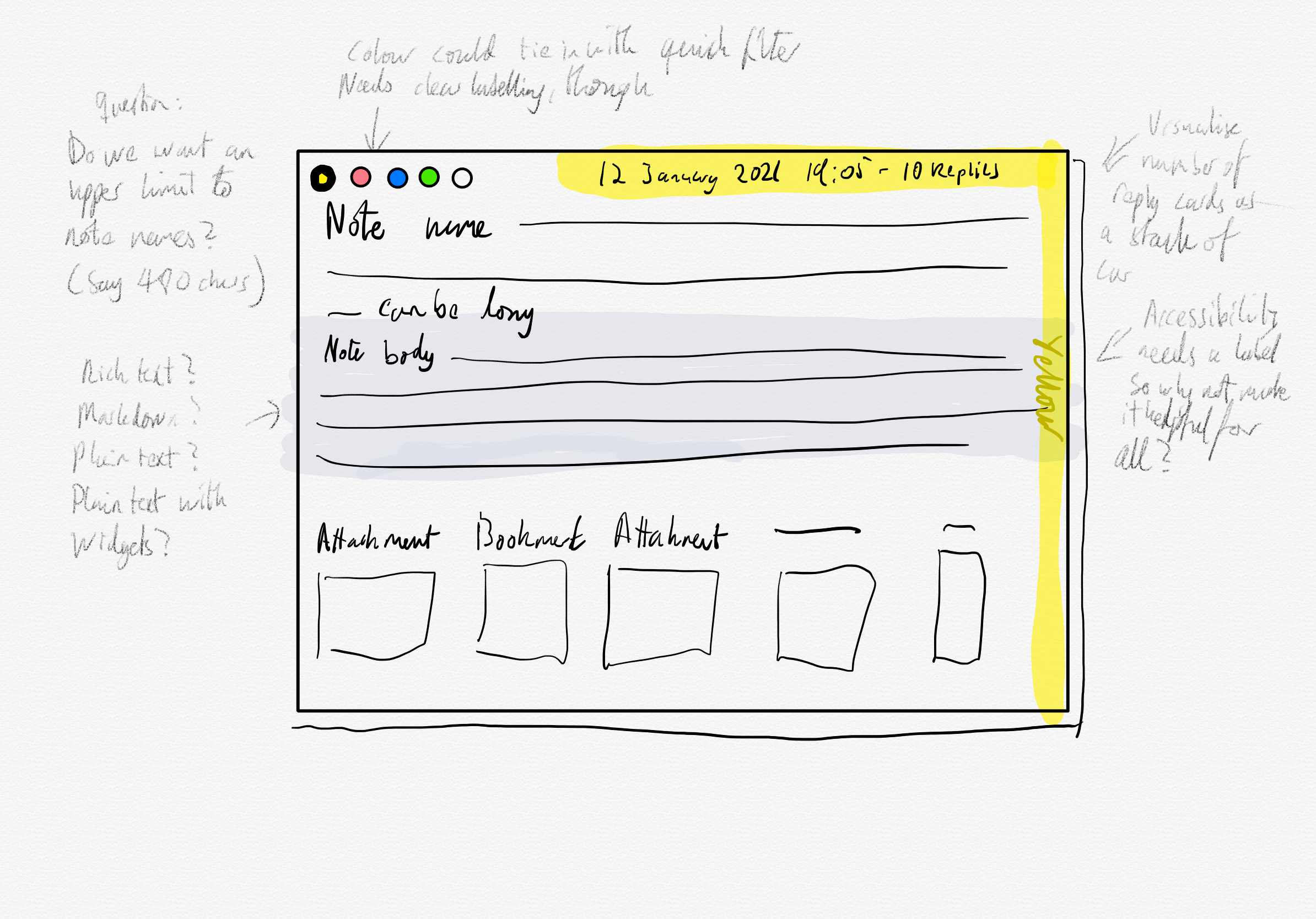 The created card has a name, replies (only displayed when you open the card as a thread), attachments, and a body. Possibly later a drag handle.

Add tag support by assigning all tags mentioned in the body or name to the card. You can show all cards with that tag by entering it (with the preceding #) in the search box.

Should the user be able to have multiple top-level threads, each a separate workspace? Or do the child cards of a solo top thread serve the same function?

The UI should support pinned notes that are persistently floated to the top. One idea is that on displays that are wide enough the pinboard should be a sidebar space and that pinned cards don’t have to just be pinned up to but that they could be arranged freely in the sidebar space.

File attachments are added via an attach button.

A special kind of attachment is the quoted card (a concept stolen from Twitter). This is a mechanism for bringing a card from one thread in as a reply to another. Cards shared from other users would also be read-only quoted cards in your threads.

If I go with markdown or plaintext [[Note Name]] would be used to automatically link to the note.

Or, I could go with the original WikiWiki design and convert all camel-cased words to links to other notes?

Links to nonexistent notes let you create that note by clicking on them.

Automatic backlinks are not a good idea. They create clutter, complexity and confusion. See Backlinking Is Not Very Useful – Often Even Harmful. Intentional backlinks, however, are amazing. The ability to explicitly add a backlink from another note to the current note you’re editing, preferably with custom link text for that context, is an extremely useful organisational tool.

How to design it, though, is a question, and it depends on the text format and link format.

Designing the sharing and collaboration mode should be a separate document. But the threads and cards UI should be single user. Nothing should happen in your threads or to your cards that isn’t done by you. Sharing should be about data, attachments and sharing your threads (or subsets of your threads) with others as documents.